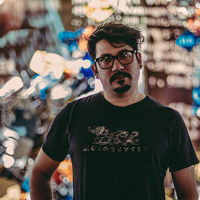 Ricardo Rivera is Creative Director and Co-founder of Klip Collective, an experiential art shop which integrates projection lighting and storytelling to create compelling experiences. Ricardo is a visual artist, filmmaker and a true pioneer of video projection mapping, having earned a United States patent for his technological breakthroughs in the medium. His work has been featured multiple times at the Sundance Film Festival, including the commissioned festival bumper in 2014. Rivera directed Nightscape: A Light and Sound Experience at Longwood Gardens which attracted over 175,000 visitors in 2015. In the advertising world, brands including Nike, Target, NBC Sports and Adult Swim have sought his unique ability to use video projection art as a bridge between architecture, technology and storytelling. The common element in all of Ricardo’s work is groundbreaking creativity and technological innovation.