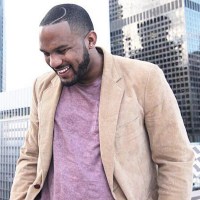 Everette Taylor is serial entrepreneur and marketing executive who founded 4 million-dollar companies before the age of 28. After overcoming homelessness as a teenager, he started his first company at the age of 19 and successfully sold it 2 years later. Since then he has founded the social media software company PopSocial and marketing firm MilliSense where he both currently serves as CEO and also co-founded GrowthHackers in 2013.

As a marketing executive, he led both Qualaroo (acquired by Xenon Ventures) and Skurt (acquired by Fair.com) to successful exits and StickerMule to unprecedented growth as CMO.

His most recent work includes serving as the National Brand Ambassador of NASA's Startup Initiative, launching the media company BESE with Zoe Saldana which highlights the stories and voices of the LatinX community and Hayver, an app to prevent drug and alcohol addiction. He was most recently named "one of the most influential African Americans in 2017" by The Root and Forbes 30 under 30 for 2018.