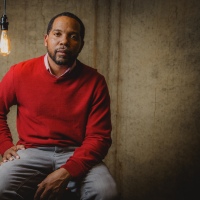 Carvin Garland Haggins is a Grammy Award Winning and Multi-Platinum Selling Song Writer, Producer, Engineer, Co-Founder of Karma Productions, Co-Creator of Forever Music Inc. and the creator of Ethical Music Entertainment. The Philadelphia native has written hit songs for Mary J. Blige, Jill Scott, Miguel, Faith Evans, Justin Timberlake, Raheem DeVaughn, and Musiq SoulChild. Carvin has always believed that the best songs come from real life experiences, and has earned a reputation for writing songs that “mean something.” Carvin has been making music since he was 11, and has developed a unique style. In the 1990’s Carvin began working as a producer at “A Touch of Jazz” (ATOJ) for DJ Jazzy Jeff. It was there, that Carvin started getting a lot of recognition for his work. It wasn’t long before his songs started making an impact in the music industry. Carvin’s early work was featured on “The Nutty Professor II,” “Love Jones,” and the “Rush Hour 2” movie soundtracks. He also collaborated on Will Smith’s soundtrack for the movie “Wild Wild West.” At ATOJ Carvin met and began working with Ivan Barias. In 2001, Carvin and Ivan started Karma Productions and have since become one of the most sought after producing duos in the country. The pair, who are now known world-wide, have had several songs at the top of the Billboard Charts including: “Love” (Musiq), “Customer” (Raheem DeVaughn), “If You Leave” (Mary J. Blige and Musiq), and “Gotta Find My Way Back” (Jaheem) Introducing Stokley (Stokley) to name a few. During his career, Carvin has been tapped to create music for television as well. Haggins is the “Music Supervisor” for the annual Christmas television special, “Holiday Love” created by, and starring actress Kim Fields. Since the show began, Carvin has not only overseen the music that goes into the special, he’s also written several original songs for the show too; including music for artists Marvin Sapp, Brian Wilson, Wes Morgan, Karen Clark-Sheard, Tamela Mann and Shirley Caesar.

After recently celebrating 10 years of having Top 10 Billboard Charting records, Carvin and Ivan followed that up with 5 Grammy nominations in 2011. They were nominated for Jaheem’s hit song “Finding My Way Back.” They were also nominated in the R&B Song of the Year category for “Gone Already” by Faith Evans. Most recently, Carvin worked on projects for Ledisi, Raheem DeVaughn, Estelle and 2014 Grammy nominated albums for Chrisette Michele and TGT. The creator of the Ethical Music Entertainment label, Haggins is behind a movement to bring respect back to radio. His artist Montina who is one of the Momma’s who sings background for Beyonce, Mz Lynx who was on MTV, Lex Dime who has a movement called Lost Girls and BriaMarie, whose singles “IDK” and“Celebrate” was featured on VH1’s Love & Hip Hop: Atlanta. Haggins’ mission is to make music that is positive, has clean and clever lyrics, and will keep you moving. To Haggins, not only making music, but raising up another generation of musicians, writers and producers that create “real” music is as important. In an effort to give young people the opportunity to explore their artistic potential, Carvin is one of the founders of the Creative Minds Performing Arts School. The school will house “Karma Junior Productions,” and is projected to open in 2020. Haggins also gives back in other ways. He was a teacher at Chester Community Charter School and on the board of directors for the Recording Academy- Philadelphia chapter. He has received numerous honors for his work and service, including being named a Creative Ambassador for Philadelphia, receiving a Lifetime Achievement Award for Excellence and Innovation for BMM 2012, and was recognized for his accomplishments and community service, at the 16th Annual Artist Ball in Philadelphia. He’s currently a member of the Philadelphia Task Force. A organization created by the city to help the creative arts. When he’s not in the studio, or working on music curriculum for his school, Carvin is in fellowship with his family and friends at Southern Baptist Church in Philadelphia. At SBC, Carvin is a Reverend and Sunday School teacher.