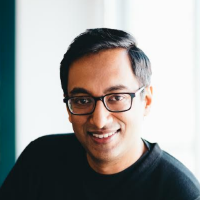 Apu Gupta is the co-founder and chief executive officer of Curalate, Inc, a leading marketing technology company that enables brands and retailers to use social content and social audiences to sell more effectively online. Curalate works with nearly 1,000 brands and retailers, including Urban Outfitters, Neiman Marcus, Target, Crate & Barrel, Forever 21, and Burton Snowboards. Curalate has raised $40MM in capital from leading investors including New Enterprise Associates (NEA) and First Round Capital, and employs over 100 people at its offices in Philadelphia, New York, Seattle, and London. Prior to launching Curalate, Apu was chief operating officer and chief marketing officer at MedPlus Health Services, Pvt Ltd. Under his leadership, MedPlus raised $25MM in venture funding and became the second largest pharmacy chain in India growing to 650 retail locations and handling over 1MM customer transactions monthly. Previously, Apu was co-founder of TaoSecure an internet security startup as well as an early employee of WebEx Communications where he served in sales and marketing roles from WebEx’s Series A through the company’s IPO. Apu holds a BBA with a concentration in computer engineering from the University of Texas at Austin and a MBA from the Wharton School at the University of Pennsylvania. Apu was recognized as an E&Y Entrepreneur of the Year in the Emerging Entrepreneur category in 2013 and is a member of the 2018 Class of Henry Crown Fellows within the Aspen Global Leadership Network at the Aspen Institute.