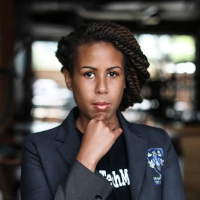 Creating an algorithm for the stock market to win Goldman Sachs Portfolio Challenge, selling her first marketing plan to Prudential, becoming a founding employee of FINRA, authoring the first ever African American Financial Experience study, inventing the top financial literacy product in the world, and being named the “Next Steve Jobs” by Forbes – all by age 30, Angel Rich has earned the title Wealth Pioneer.

In 2009, Rich became a Global Market Research Analyst for Prudential Financial. While there she conducted over 70 financial behavior studies including the Obama’s Veterans Initiative. During her final year at Prudential, she helped the company’s Annuities division grow from #16 in Service to #4, helping the company save $6 billion.

After leaving, Rich founded The Wealth Factory with a mission to provide equal access to financial literacy across the world. Today her company designs WealthyLife financial literacy education technology games, gaining world-class recognition for their first product, CreditStacker. It has been coined the best financial literacy product in the country by The White House, Department of Education, and JP Morgan Chase. Google named it one of the Top 10 Apps in the world in 2017.

In 2017, Rich also released her first book – The History of the Black Dollar – with the foreword written by Dr. Maya Rockeymoore. The book takes readers on an economic journey through history to depict the major milestones, historic figures and upcoming leaders.

Later that year, she was honored to be named Hamptonian of the Year and help found the Hampton University Entrepreneurship and Innovation Institute. She is also a proud member of the 2016 HBCU 30 Under 30, Hampton 40 Under 40 and Google Top 30 Black Female Founders.

In 2018, the United Nations named her one of the Top 100 Most Influential People in the African Diaspora and one of four Icons.